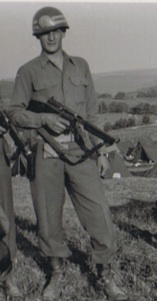 Readers lead. Those who cannot read, or refuse to read, follow. Often they are led astray down the wide path that leads to destruction and never-ending torment for the soul.

In military circles baptism by fire refers to a soldier’s first time in battle. In one sense it is the first time a soldier dies, for even if they survive the war, they are changed forever. In the TV series Band of Brothers private Albert Blithe seems reluctant to engage the enemy, to advance, to do anything other than hunker down. Captain Ronald Speirs comes along and gives Blithe this advice.

The only hope you have is to accept the fact that you’re already dead. The sooner you accept that, the sooner you’ll be able to function as a soldier is supposed to function: without mercy, without compassion, without remorse. All war depends upon it. ― Stephen E. Ambrose, Band of Brothers: E Company, 506th Regiment, 101st Airborne.

This is the function of baptism: we accept that though alive, we are already dead.

Those who read, those who learn, those who study the archived documents of wars and conflict, who observe the animal kingdom, understand that death comes fast: certainly much sooner than we expect. Be it baptism by fire or baptism by water, death comes to all.

A recent article in um-insight.net examined water baptism within the United Methodist denomination. UMC is but one of many that treats baptism as a minor event in the life of a believer. It’s mentioned in our denominations’s “Field Manual,” but not emphasized. Cynthia B. Astle, the author of the article, cites the following texts from the current UMC Book of Discipline.

“Our Doctrinal Standards and General Rules, Article VI The Sacraments. We believe Baptism signifies entrance into the household of faith, and is a symbol of repentance and inner cleansing from sin, a representation of the new birth in Christ Jesus and a mark of Christian discipleship.

“We believe children are under the atonement of Christ and as heirs of the Kingdom of God are acceptable subjects for Christian Baptism. Children of believing parents through Baptism become the special responsibility of the Church. They should be nurtured and led to personal acceptance of Christ, and by profession of faith confirm their Baptism.”

“Our Doctrinal Standards and General Rules, Article XVII—Of Baptism. Baptism is not only a sign of profession and mark of difference whereby Christians are distinguished from others that are not baptized; but it is also a sign of regeneration or the new birth. The Baptism of young children is to be retained in the Church.”

“The Ministry of All Christians, Paragraph 122: The Process for Carrying Out Our Mission—We make disciples as we: … lead persons to commit their lives to God through baptism by water and the spirit and profession of faith in Jesus Christ;”

“The Ministry of All Christians, Paragraph 126: All Christians are called through their baptism to this ministry of servanthood in the world to the glory of God and for human fulfillment.”

“The Ministry of All Christians, Paragraph 129: “… In baptism, water is administered in the name of the triune God (specified in the ritual as Father, Son, and Holy Spirit) by an authorized person, and the Holy Spirit is invoked with the laying on of hands, ordinarily in the presence of the congregation.”

“Church Membership, Paragraph 216 (2) a: There are many occasions as people mature in the faith when the Holy Spirit’s confirming action may be celebrated, such as in the reaffirmation of the baptismal covenant or other services related to life passages. Unlike baptism, which is a once-made covenant and can only be reaffirmed and not repeated, confirmation is a dynamic action of the Holy Spirit that can be repeated.”

“The Ministry of the Ordained, Unauthorized Conduct, Paragraph 341 (7). No pastor shall re-baptize. The practice of re-baptism does not conform with God’s action in baptism and is not consistent with Wesleyan tradition and the historic teaching of the church. Therefore, the pastor should counsel any person seeking re-baptism to participate in a rite of reaffirmation of baptismal vows.”

Look again at the requirements for and purpose of baptism.

The UMC and other denominations baptize infants. In my experience they seldom encourage youth, young adult, or even old adult baptism. An infant or toddler who is still learning to crawl, walk, talk, cannot be expected to make a decision regarding their new:

The Apostle Paul gives a clear summary of the importance of water and spirit baptism.

Don’t you know that all of us who were baptized into Christ Jesus were baptized into his death? We were therefore buried with him through baptism into death in order that, just as Christ was raised from the dead through the glory of the Father, we too may live a new life.

If churches are wetting infants on the head and calling it baptism, it’s no wonder so many young and new adults today reject the idea of Jesus, God, sin, and their need to repent. If an individual truly has been baptized and received the Holy Spirit of Christ, we might expect some evidence of spiritual fruit.

Instead, what we find much too often is a culture of spiritual rot.

A recent Barna survey reveals that most American christians do not believe that Satan or the Holy Spirit are real. Thinking good thoughts about others, does not make them good. Believing Satan is not real or that the Holy Spirit is only a mystic symbol of religious piety does not change the impact both have on humanity. Because British Prime Minister Neville Chamberlain believed Britain and Nazi Germany were “the two pillars of European peace and buttresses against communism” he bowed to all of Adolph Hitler’s demands. Chamberlain thought Hitler meant no harm.

I was raised in the Methodist church. As I recall, I became the 1000th member of St. Marks United Methodist Church in Raleigh. (It’s possible I mis-remembered this part, but nonetheless I like to claim this distinction.) I was in our church’s youth fellowship, went to Sunday School, participated in Christian groups at N.C. State and yet, I had never died and been born again. I’m sure God’s protection and provision surrounded me and I have no doubt he called me, if you had asked me in high school if I’d been baptized in water and with God’s Spirit I would have said no.  Then one day, while in college at State, I went to New Life Camp at the corner of Durant Rd and Falls of the Neuse Rd, was baptized. Later in the old auditorium in D. H. Hill library I prayed to be filled with God’s Holy Spirit. Only then did I truly receive a new birth.

Those who are in the Kingdom of God know we are war, but not with our neighbor. Our neighbor, like Chamberlain, may be misguided, confused, naive, but he or she is not our enemy. This war is fought in the spiritual realm where angels and demons, light and darkness, battle for the souls of the lost. This is not some video game that can be turned off, reset, replayed.

This is deadly business.

So watch videos if you wish. Play games if you want. Read books; please read books! Just know that while you are lost in a fantasy world of entertainment, the enemy is rolling across the countryside killing and taking hostage those too naive to believe the rumble of gunfire means that Satan is advancing.

In the end private Albert Blithe realized he was a dead man walking, picked up his weapon, and became a soldier. He fought without mercy, without compassion, without remorse. His small efforts helped defeat evil. Your enemy, the one you may think doesn’t exists, shows no mercy, no compassion, no remorse.

And whether you believe he exists or not, he’s gunning for you. If you want to fight back, email me and I’ll help you get fitted out for battle.

In China, the government moves into a church, removes the pastor, and installs one of their own. Same with the United Methodist Conference in Georgia.

In China, if a church refuses to submit to the government approved pastor, the government moves in, padlocks the doors, and takes possession of the facilities and property. Same with the United Methodist Conference in Georgia.

In Canada, if a church refuses to abide by Canadian laws, government officials padlock the doors and place a fence around the building.

The singular difference between China and Canada is that neither the Chinese government or Canadian officials claim to be doing this “out of love” for those in the church. The North Georgia Conference issued the following statement on July 12:

Acting out of love for the church and its mission, the North Georgia Conference of The United Methodist Church’s Central West District Board of Church Location and Building, the Bishop, and the eight District Superintendents have unanimously determined that “exigent circumstances” have threatened the continued vitality and mission of Mt. Bethel United Methodist Church. Given this determination, all assets of the local church have transferred immediately to the Conference Board of Trustees of the North Georgia Conference.

It seems only the United Methodist Church’s North Georgia Conference claims to cast out an entire congregation in an act of love.

For another perspective on this skirmish in the UMC split visit:

A Deeper Look at the Mt. Bethel UMC Conflict

The Conference affirms the following summary understanding of cohabitation: The Church recognises [sic] that the love of God is present within the love of human beings who are drawn to each other, and who enter freely into some form of life-enhancing committed relationship with each other, whether that be through informal cohabitation or a more formal commitment entered into publicly.

As a Church we wish to celebrate that the love of God is present in these circumstances, even if that grace is not responded to or even discerned by the people concerned.

The Church has an important calling, therefore, to point to the presence of God’s love within such relationships, and to encourage people to respond to it in the renewing and deepening (by whatever means) of their commitment.

In response to this denial of Christ’s holiness, how might we in the UMC of the U.S. respond?

First, we need to express our sorrow to the Father.  The Apostle Paul wrote to the Corinthians that, “Godly sorrow brings repentance that leads to salvation and leaves no regret.” (2 Corinthians 7:10) Sorrow-filled cries to the Father over our sin will always reach his ears.

Third, focus on our holiness. “Let us purify ourselves from everything that contaminates body and spirit, perfecting holiness out of reverence for God.” (2 Corinthians 7:1) It’s fine to be concerned about the sins of others, but before we correct our brother or sister, we should check our own spirit. “For it is written: ‘Be holy, because I am holy.'” (1 Peter 1:16)

“Let marriage be held in honor among all. Let the marriage bed be undefiled, for God will judge the sexually immoral and adulterous.” (Hebrews 13:4)

Years ago Christians brought the institution of slavery from Great Britain to the American Colonies. Let us reject this growing expansion of slavery to sin. Who knows but if we confess, repent, and pray for mercy that God may yet act and save the United Methodist Church in America.