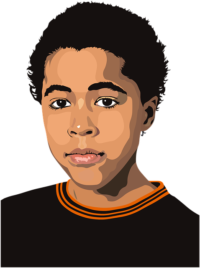 I grew up in a black neighborhood; I grew up in a white neighborhood. To the left of our house lived the Moore’s. Their small home sat on a rise overlooking the creek that separated the two properties. To the right lived Dwight, Mark, Pat and around the corner, where Mount Vernon Church Road met Six Forks, Yvonne. Four whites to the right, five blacks to the left.

The dads got together one summer and built us a bus stop at the corner of Mount Vernon and Six Forks. Walking to the bus stop became something of a parade. Today such an occurrence may be mistaken for a protest march but for us, in the mid 60s, we were simply eleven kids heading off to school.

After our stop, the bus would pick up Richard and Wilbert Dunn. The Dunns lived in a home that stood across from what is now Taylor’s Wine Shop (Taylors also sells fishing worms.) Next, also on the left side of Six Forks, we’d stop for the Holding kids. True story (as I remember it), Chester Holden was a short, muscular boy, a few years older than me. When I tried out for football in high school, Chester was already on the team. The players called him Tree Stump. Except because Chester’s legs were so short, each year when players were required to run—I forget how far it was—Chester failed to run within the time necessary to make the team. His legs moved faster than all the rest of us, but he didn’t run fast enough. Each year Coach Shirley would hold Chester back after practice and give him another shot. And each year, miraculously, Chester made the team.

During summers we would play pickup baseball in a field across from what is now New Life Camp. What was then Mount Vernon Church was a pop fly from the field. We’d arrive on bikes or foot and divide teams evenly to keep things competitive. None of us cared about the color of a boy’s skin. We simply wanted a good game of ball.

I played organized ball on Bayleaf’s Little League team. Later we became Six Forks, but changing the name did not improve our record. We were county boys playing city kids who drew from a larger pool of players. During practices Arthur Thompson would hit, catch, throw with us. Arthur was easily one of the best players at practice. His younger brother, Boo Boo, showed up at practice too, but Boo Boo was more of a cut-up and didn’t take things as serious. Given that we lost most of our games and Arthur could hit farther, run faster, and throw harder than most of the boys on the team. I once asked Dad why Arthur never played with us during real games.

Dad explained that Arthur was black. Like somehow that fact had escaped me. I asked why that mattered. I don’t remember Dad’s explanation. Only thing I recall is that whatever he said still made no sense. If you are getting trounced by K-Mart, Brentwood, Millbrook Church, the Teamster’s, St. James Church, Carter’s Seafood, New Hope Church and pretty much every other team you play, you want help. Arthur would have definitely made us a better team. But as I mentioned, he was black.

Once Mom, my sister and I were in the K-Mart at the corner of Six Forks and Old Wake Forest—the one that used to flood every time Crabtree Creek overflowed its banks. I spied Arthur and his family in the store, called to him, and Mom shushed me. Turns out it was fine to know Arthur on a baseball field but not in a store where people might see.

In first grade Eleanor Rodgers wore glasses. I wore glasses. She was black; I was white. When you’re called “four-eyes” in the first grade, you’ll be friends with anyone who keeps masking tape and Elmer’s glue in their desk. Eleanor and I were best buds.

My freshman year at Millbrook, Jeffry Harris kicked my butt outside a trailer as I was leaving English class. No kidding. He actually kicked my backside. He wanted to fight. I explained I didn’t want to fight. Had I fought Jeffry he could have not only kicked my butt, but probably broken my glasses and nose. Three years later, on the night we graduated at Memorial Auditorium in downtown Raleigh, Jeffry came over and shook my hand. We’d hardly spoken the four years at Millbrook. Only thing I could figure was, not fighting back had somehow let Jeffry know that I wasn’t his enemy.

I grew up with the white privilege of having black friends — and I thank God for it.