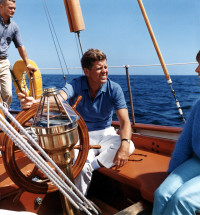 Please note: what you are about to read is all hearsay. I was there but do not remember any of the details of the events of which I am about to report. My sister says it all happened as she described and I am certain it did. My sister is always right, even when she’s wrong.

So here’s what happened. Marji and I were staying with Grandmamma Jones in the Green House – green being the color of the structure, not the name of the owner, though on the Jones side of the family there is a strand of Greens. There is also a thread of Gays but we will leave that alone for now.

Okay, so Grandma Jones babysat us that day and as she was prone to do, we went visiting her neighbors. On this occasion, her neighbor was the governor of North Carolina. “She led us around back,” my sister recalls, “and we sat on the back steps. The maids brought us lemonade.”

At some point, Grandmamma Jones returned and marched us to the front of the Governor’s Mansion. JFK arrived, we stood, I watched. At least that’s what my sister tells me. Again, I was only three, so I only remember this in a vague heard-it-countless-times-before-so-it-must-be-true sort of way. For all I know I might have been home watching Mr. Kangaroo on a black and white TV.

“The President patted you on the head, turned and walked up the steps into the Governor’s Mansion. For some reason you took this as your cue to follow him inside. You got as far as the foyer before they stopped you.” 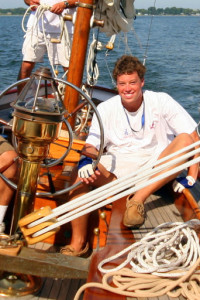 My son flashing his JFK smile

At 11:21 am CST fifty years ago yesterday, Jack Ruby murdered Lee Harvey Oswald. We will never know if Oswald acted alone, if Ruby was hired to silence President Kennedy’s assassin or how the course of our nation might have been altered had JFK lived and served two terms. But I know this: on a warm day in 1960 I met JFK.

Or so my sister says.