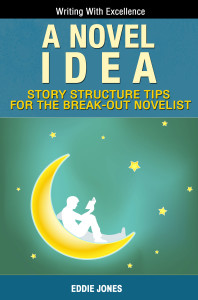 A Novel Idea: Story Structure Tips for the Break-Out Novelist

(excerpt from A Novel Idea)

The basic structure of plot and the three-act framework are so universal that it is embedded in our DNA (We’re born, we live, we die.) We accept the three-act structure because it echoes the structure of our days: We rise (to an adventure), work (through our problems), and we return (to somewhat of a normal home).

Every story opens with the introduction of your main character. Here the reader must have a clear sense of what the story is about. What is its tone, promise, the problem for its main characters, and the types of characters we will meet? Blake Snyder, author of Save the Cat, writes: “The Hero has to do something when we meet him so that we like him and want him to win.” This single enduring quality will bond your readers to your main character.

Though problems exist for your main character, your Lead will remain in his/her normal world unless and until something throws everything off balance. This is your Lead’s “inciting incident.” This great disturbance shifts your Lead’s life in a new direction. Many times your Lead will resist this call to action (presenting the seeds of inner conflict). In this debate section, your Lead must wrestle with a question. Here you will hint at the sacrifice to be made later. An additional element (prize or punishment) will be added to the mix and finally your Lead will accept the challenge and depart. Thus Act One will move from:

The curtain comes down, marking the end of the first act. In order to move your Lead from Act One into Act Two, he/she must pass through what James Scott Bell calls a “one way door.” If your lead can return to his/her previous life, then he/she hasn’t jettisoned his/her old life for the new.

Act Two reveals your Lead’s emotional journey as he/she overcomes obstacles. As the hurdles become more frequent and larger, you raise the stakes for your Lead. Both inner and outer struggles will mark your Lead’s journey as they move toward what appears to be certain defeat. Include both reversals of fortune and unexpected blessings to give your reader both a sense of hope and dread.

Early in Act Two, change your Lead’s status. Depending on your Lead’s “normal” life, remove or increase your Lead’s power, position, and prestige. Oftentimes your character becomes the opposite of what he was in Act One. Think Harry Potter. At the beginning of each book, Harry is in Muggleland, without power, prominence, or freedom. In Act Two (at Hogwarts), Harry finds himself powerful, revered, and favored by the faculty.

Act Two will consume the major part of your story. Often called the “muddle,” the bulk of your action takes place here. Regardless of whether the conflict is internal or external, your lead must face a series of confrontations, both small and large, between him/her and the opposition. Act Two moves from:

Act Two is an inverted mirror of your Lead’s normal world in Act One. Here, the characters from Act One appear as enlarged or diminished personalities. For example, in the Harry Potter stories, the character of Dudley Dursley (Harry’s antagonistic, spoiled, and bungling stepbrother) appears in Act Two as the antagonistic, spoiled, and powerful Draco Malfoy. (They even share the same first letter in their first name.) The first half of Act Two is the fun and games portion of the story. This often coincides with your character’s “status change.” (Again, the idea of “status change” is to flip your Lead’s position, power, or prestige. If they’re rich in Act One, they become poor in Act Two. Single in Act One? In love in Act Two. Unemployed in Act One? CEO of the company in Act Two.) Here in the fun and games scenes, your main characters bond, travel, explore, and learn about each other. Often the tone is light and painted in rich colors.

Midway through Act Two your Lead will reach a high or low point reflecting a turn in his/her journey. The midpoint is never as good as it seems or as bad as we fear, but it does mark “halftime” for your Lead’s journey. Now the stakes are raised. The bad guys become worse. The danger increases. There is a hint of death and your Lead faces conflict at every turn. Each scene brings him/her closer to the “black moment”—the instance where all appears lost.

To move from Act Two to Act Three, your lead must reach a breaking point. This is your Lead’s moment of crisis: his/her crucifixion. Here the story will demand that a principle or person be sacrificed for the good of the goal. This is the point where your Hero’s old world and old way of thinking die to the “new normal.” With nothing left to lose, your Lead is willing to risk everything for one last shot at reaching the goal. Once committed, your Lead can’t go back. He/she rushes through another one-way door.

Thrust into another new world, your Lead faces his/her greatest fear: the one thing they hoped would never happen. This shift in direction is the second great transition. Any form of transpiration will work. The idea is to allow your reader to see your character moving toward the final confrontation. Thus, in Act Three your Lead will experience:

A mode of transportation will deposit your Lead at the edge of their internal and external battlefield. From here they will walk to his/her cross with the outcome of their journey in question. Upon reaching the summit, your Lead will face his/her final confrontation. He/she will either reach the goal or fail miserably. After the dust settles, tie up the loose ends. The ending of your novel will tell the reader how to feel and what to think about the events that just happened.