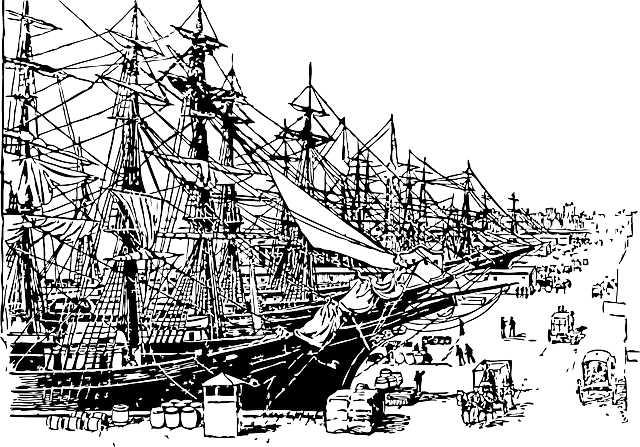 It was well into the evening when I finally arrived at the water front in Antalya. Among the great masts outlined against the darkening sky I searched for a vessel that would take me to back to Seleucia in the region of Decapolis.

Since early morning I had been making my way on foot from the road that leads to Pisidian Antioch. The heartbreak of leaving my companions was made worse by the shame I felt. Though I knew he meant me no harm, Paul’s harsh words at my departure left my cheeks streaked with tears. Only the dim light of dusk hid the humiliation I felt from his stern words of rejection.

Wrapped in a bundle and slung over my shoulder, I carried a few personal trifles.

Days earlier I had been so excited over the prospect of setting forth to declare the news of my Lord Jesus, but now  with the sun sinking over the mountains, my enthusiasm for the mission waned. I merely wished to be home with Mother in Jerusalem.

In the lengthening shadows, I recalled the moment when I first realized that the Teacher, the one I believed to be the Messiah, had come to call me to proclaim his good news.

On that morning word reached me that Lazarus, the brother of Martha and Mary, had died. I left our home quickly and ran from the city, down into the valley and up through the grove of olive trees. Atop the rise I spied several of his followers and hurried to join them.

“But he has been dead for four days,” one of our companions remarked. “And besides all that, by this time there is a bad odor.”

“And from this you interpret the Teacher’s words to mean he will raise a dead man?”

“Heard it with my own ears, I did. ‘Your brother will rise again,’ the Teacher declared. His words were not those of a mourner comforting the grieving but of someone speaking expectantly of seeing their friend.”

Fortunate I was that day to stumble upon the pair, for had I not, the large crowd would have prevented me from gaining a view. Through scrub bushes and over rocks we scrambled until at last we reached a rise that looked down upon the tombs.

With his back to me, the Teacher said to the crowd, “Did I not tell you that if you believed, you would see the glory of God?”

Months before in the region of Galilee the Teacher had promised that very thing: that if we would but follow him and believe we would see the glory of Yahweh.

On elbows I pulled myself closer to the edge, sending pebbles cascading onto the ground. Pivoting slightly, the Teacher looked over his shoulder at me, offering a slight smile—and dare I say—a wink as well.

At his command, men stepped forward from the crowd of mourners and removed the stone that sealed the tomb. Shifting his gaze from me, the Teacher looked up towards heaven.

At this, my spirit quickened within me.

At other times I had seen him look towards heaven. First when he fed crowds with only a few loaves and fishes. Then when he healed the lame, the blind, and cast out demons. Among those of us who followed the Teacher we would sometimes say in jest, “Beware of looking away when he looks up. If you do, you may miss a miracle.”

“Father, I thank you that you have heard me,” the Teacher said. His was a private prayer spoken loud enough for all to hear. “I know you always hear me.”

At his words I could not contain my excitement, for the Teacher always thanked his father before drawing power from above.

“I said this that they may believe that you sent me,” the Teacher said. Inhaling deeply, he called in a loud voice, “Lazarus, come out!”

By now as you well know, the dead man appeared in the entrance of the tomb. The Teacher ordered the bindings of the burial cloth loosened in order that Lazarus might go forth freed from death and decay.

From that day on the Pharisees plotted to take the Teacher’s life. Because so many of the Jews had put their faith in the Teacher, the chief priests and Pharisees gave strict orders that should anyone find Jesus they were to report his location so that he might be arrested. In the streets near my home, people went about asking, “Is the Teacher not coming?” They looked for him in the temple and left disappointed. Such was the hatred those who were righteous in their own eyes had for the Teacher.

“If we let him go on like this,” a Pharisee said to the high priest, “everyone will believe in him and we will lose our place of importance.”

From the beginning the Teacher’s authority, power, and righteousness exposed the hearts and motives of all. Even today the righteousness of his Holy Spirit shines light on those dark areas of our soul we seek to hide. For this reason I fear for the lives of Barnabas and Paul. They will be hated wherever they go.

Wisely, after Lazarus returned home to Martha and Mary, the Teacher retreated to Ephraim and remained there until a few days before Passover. But by then his fate had been sealed. The chief priests and Pharisees, along with all who refuse to acknowledge their wickedness, sought have him crucified.

Oh how I wish I had the courage of my Lord, but I am a coward. A mere boy in a young man’s body. My Lord and my God, please forgive me for turning back—and for turning my back on you.

Yet, well I know, Lord, that you will never turn your back on me. Your smile and wink at the tomb of Lazarus I will treasure forever. Only please now help me find passage back to Mother.