“Great riches are in the house of those who are right with God.” Proverbs 15:6

Lord, am I right with you? Close? Near enough right to receive your riches?

If not, show me where your Holy Spirit needs to work in my life, where I need to be changed and made holy. Examine me as severely as necessary that I may confess, repent and be changed, but do so with as much mercy as possible. 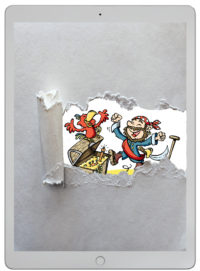 Being a lass or feller be both fun and scary. Fun on account of ya have tha freedom ter sail yer own course. Scary on account of tha world be rife with monsters and demons in caves of blackness whar poor souls be held hostage by dark thoughts.

If ya be drowning in a sea of worries and fear, anxious ’bout what tomorrow ‘ill bring, no worries, mate. Climb aboard Skipper’s vessel and follow his Sun as we sail towards paradise whar thar be good news, hope, and life fer ever.

In March of this year I wrote:

There is the need for a site where authors can feature all works that honor and respect God and Christ, offer online chats with readers, stream live video events, feature video trailers and promotions, and publicize events. Imagine if Goodreads married Bookbub and their offspring produced a site similar in appearance to Amazon but without the commerce aspect. That is my vision.

This vision actually came to me last year. I’ve noodled on it for almost twelve months. I kept looking for someone to launch such a site. I certainly didn’t want to take on such a huge task. And yet here I am, attempting the impossible.

This link is a sneak peek of what I’m working on: https://bookdeals.app/

There is still work to be done, but in the weeks ahead we plan to roll out Book Deals with a soft launch. Our goal is one million subscribers. When we reach that goal, then upon a book’s release we should be able to push it to “best seller” status within days.

When I was at LPC our FREE Kindle newsletter ranked at the top of our promotion tools. It was free marketing for our authors and if the title was new to subscribers, the email blast always generated sales. Often it pulled in sales for other books by that author.

With BookDeals.app (and yes there will eventually be an app) should Amazon ever kick Bibles and Christian books from their site, there would still be a way to communicate new releases of Christian titles and general market titles written by Christian authors to the masses.

Later we hope to expand the offerings to audiobooks, Christian music – movies – TV shows. Not sell, but point to places where music, shows, movies can be purchased or streamed.

If you would like to know how you can help grow this area of God’s kingdom, email me.