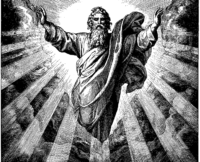 Did God really say he is Jesus?

Then the Romans killed Jesus.

So is God dead?

Great question. Check back later to find out how and why the dead do not stay dead.

Image is a U.S. work in public domain in the U.S. for unspecified reason but presumably because it was published in the U.S. before 1924.